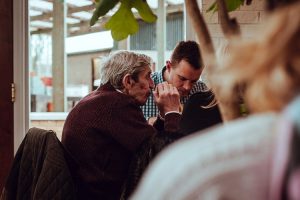 Photo by Cathal Mac an Bheatha on Unsplash

You may end up paying out-of-pocket for some or all of your long-term care costs or for those of a family member, since Medicare only pays for limited home of nursing home care post-hospitalization and you or the family member may have too much in resources to qualify for Medicaid coverage. How much this will cost depends on the level of care, the amount of time care is needed, and whether family members can step in and help out. We often see elderly couples propping each other up, one with physical challenges and the other with some level of dementia. The structure often delays the need to pay for hired care until the spouse with physical needs is hospitalized and the spouse with dementia can no longer live at home.

For most seniors, the need for expensive care is relatively short-term. But even short-term care can be costly. Around-the-clock care can easily cost $4,000 a week. Many seniors can afford this for a few months, but not longer. The problem, of course, is that’s it’s unpredictable. No one knows in advance whether they’ll need care for days, weeks, months, or years. Often they pay out-of-pocket until they run out of funds and then qualify for Medicaid coverage, whether for nursing home, assisted living, or home care. Unfortunately, the rules for Medicaid coverage are extremely complicated, differ from state to state, and change often. Other articles discuss these rules and how you can plan for coverage either in advance or when a need for care arises. In some cases, Medicaid will provide partial payment and help stretch your out-of-pocket spending to enable you to stay at home or in assisted living longer rather than having to move to a nursing home right away.

Avoiding the use of Medicaid and simply paying for care out-of-pocket is the least complicated way to pay for care, but also (of course) the most expensive. In most cases, the cost can be mitigated to some extent because it is tax deductible as a medical expense. Health care costs can be deducted to the extent they exceed 10% of your adjusted gross income (AGI). Often, seniors are in very low tax brackets, meaning that the deduction provides little benefit. But if retirement plan funds are used to pay for care, the result can be that the withdrawals, which are usually taxable, in effect, become non-taxable.

In addition, if a child pays for a parent’s care, he can usually deduct these costs on his tax return, which may provide a larger benefit, since the child will probably be in a higher tax bracket. Of course, less of the payment may be tax deductible due to the 10% of AGI that is not deductible. For instance, for a parent earning $50,000 a year, $5,000 of the health care expenses will not be deductible. A child earning $200,000 will not be able to deduct the first $20,000 of health care expenses. On the other hand, the child with the higher deductible will also be in a higher income tax bracket, making the deductible more valuable. Here’s how it would work in this example:

The father, Mark, needs care at home costing $50,000 a year. (For this example, we’re assuming that neither he nor his son have other deductible health care costs.) His annual income is also $50,000 a year, meaning that he can deduct $45,000 of  his care costs. This would totally eliminate his income tax of about $6,300 (which is undoubtedly overstated, since if much of his income is from Social Security, it would not all be taxable).

Mark’s son Dennis has an income of $200,000, so if he paid Mark’s care costs, he would be able to deduct $30,000. But since he is in a 28% bracket (not counting any state income tax) this would reduce his income tax by about $8,400. So it would make sense for Dennis to pay for Mark’s care. It would be possible for Mark to give Dennis his savings, perhaps as part of a Medicaid plan, so that Mark has the resources to pay for Dennis’s care.

The tax savings, of course, would be greater the higher the care costs and would depend on both the parent’s and child’s financial situations. In either case, the care costs are only deductible if they are “above the table,” in other words, if the care provider is treated as an employee. This can be a difficult issue for many families hiring in-home. Legally, any in-home worker is an employee and is entitled to all the rights of an employee, including FICA contributions, workers compensation, overtime and, in some states, personal and sick leave. Not only does this increase the cost of hiring care, but it’s also very complicated. Often, the workers themselves resist being paid above the table because their share of the FICA contribution reduces their take-home pay. One service that helps with the process is HomePay from Care.com.

How Can I Save My IRA from Long-Term Care Costs?

Can You Get Long-Term Care Assistance if You Already Need Help with ADLs?

Can Assets be Protected after a Criminal Conviction?