What’s the Effect on My Right to See Grandchildren if they Move to Canada? 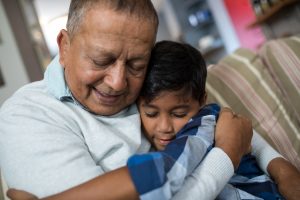 My adult son moved from California to Edmonton, Canada. He is not married to the girl he has been living with for almost five years and with whom he has children. What rights do I have as a grandparent to see the children? What rights does my son have as an American, regarding his children, if he comes back to the United States? Can he get the children passports to come to the states? Do I have a right to see them if they were to split up?

You have a number of questions that mix parental and grandparental rights with immigration and child custody laws. I won’t be able to provide definite answers, both because these are not my areas of expertise and I know nothing about Canadian law. But I hope the following will at least provide a framework for considering these issues.

First, in the United States, grandparent rights are limited and depend both on specific state law and each situation. The courts will look to the best interests of the grandchildren in each situation. A quick web search indicates that Canadian law is similar, except in Quebec where it is presumed that maintaining the grandparent-grandchild connection is in the grandchild’s best interest, switching the burden of proof to the party trying to prevent visitation. Check out this site for more information.

Second, your son’s rights should not be affected by his being an American or by living in the United States. Of course, living far from his children could have a serious impact on their relationship.

Third, if the grandchildren are American citizens they’re entitled to U.S. passports. If they have dual citizenship, it can get complicated crossing the border in terms of which passport to present. My brother and his family all have dual citizenship (Swiss-U.S.). My understanding is that they use their U.S. passports when traveling into and out of the United States, but use their Swiss passports everywhere else. An immigration attorney should be able to advise your son on this.

Finally, whether the parents are together or have split up should not affect the grandparents’ right of visitation, but as mentioned above, those rights are limited in any event.

Considerations in Making Gifts to Your Grandchildren – Massachusetts

Consider Putting Gifts to Grandchildren in a Trust

What IRS Forms are Necessary When Distributing Share of Estate to Foreign Beneficiary?