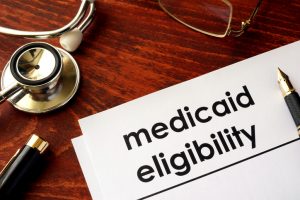 Calculation of the Transfer Penalty

The restrictions are in the form of a penalty for asset transfers, calculated as a period of time during which the person transferring the assets (and his or her spouse) will be ineligible for Medicaid coverage. The period of ineligibility is determined by dividing the amount transferred by what the state Medicaid agency determines to be the average private pay cost of a nursing home in your state. For example, if you live in a state where the average monthly cost of care has been determined to be $8,000, and you give away property worth $120,000, you will be ineligible for benefits for 15 months ($120,000 ÷ $8,000 = 15).

However, because of the way this transfer penalty is applied, as a practical matter, the penalty period is much longer. It does not begin until you  (1) move to a nursing home, (2) spend down to the asset limit for Medicaid eligibility, and (3) apply for Medicaid coverage. Here’s an example of how this works:

As you can see, the effective penalty in this example is 39 months from the date of the transfer, not 15 months. This would leave you with 15 months in the nursing home with no coverage and no money left to pay for your care. If you gave the money to your children and they returned it, this would both eliminate the penalty period—often called a “cure”—and provide you money to pay for your care.  However, you’d have to be very fortunate if, in 2022, your children still had the $120,000 you gave them in 2020, and they were willing to return it to you. The inability or unwillingness of gift recipients to cure the transfer often leaves nursing home residents, nursing homes, and family members in conflict because the money is gone and the facility is not being paid to care for the resident. We’ve seen many ugly lawsuits as a result.

The Five-Year “Look Back” Period

When applying for Medicaid, you must report any transfers you or your spouse made during the prior five years. This, in effect, often becomes the penalty period for transfers and it can be a trap for unwary people who transfer large amounts because an application for benefits triggers both the reporting requirement and the transfer penalty, which can sometimes be longer than five years.

To see how this works, let’s say that instead of transferring $120,000, you gave your house, worth $600,000, to your children. This would cause six years and three months of ineligibility ($600,000 ÷ $8,000 = 75). Given the timing of the transfer, entering a nursing home, and applying for Medicaid described above, if the transfer penalty began on April 1, 2022, it would not end until July 1, 2027, more than seven years after you made the transfer and more than six years after you entered the nursing home. If, instead, you waited until April 2, 2025, to apply for benefits—five years and one day after transferring the house—you would not have to report the gift and you would be immediately eligible for Medicaid coverage, two years and three months sooner than if you applied during the five-year look back period. Timing can be everything.

Other Reasons Not to Make Gifts

Bear in mind that if you give money or other property to your children, it belongs to them and you should not rely on them to hold onto it for your benefit. However well-intentioned they may be, your children could lose the funds due to bankruptcy, divorce, or a lawsuit. Any of these occurrences would jeopardize the savings you spent a lifetime accumulating. Do not give away your savings unless you are ready for these risks! In addition, transfers can affect grandchildren’s eligibility for financial aid and have bad tax consequences as well, especially with respect to highly-appreciated property, such as real estate or stock. Here’s how that works:

Let’s say, 30 years ago, you purchased stock for $10 a share and today it’s worth $100 a share. The $10 purchase price is your “basis” in the stock. If you sell the stock today, you will have capital gain of $90 a share—the difference between the basis and the selling price—on which you will have to pay taxes. If you give the stock to your children, they will have the same basis as you and have to pay the same taxes if they sell it. On the other hand, if they inherit the stock at your death, the stock’s basis gets “stepped up” to the value on your date of death. If that is $100 and your children sell the stock for $100, then there’s no gain and no tax liability. (Trusts can be used to protect appreciated assets from the Medicaid spend down and preserve the step-up for those inheriting the property.)

As a rule, never transfer assets for Medicaid planning unless you keep enough funds in your name to (1) pay for any care needs you may have during the resulting period of ineligibility for Medicaid, (2) feel comfortable making the gift, and (3) have sufficient resources to maintain your present lifestyle.

Remember: You do not have to save your estate for your children. The bumper sticker that reads “I’m spending my children’s inheritance” is a perfectly appropriate approach to estate and Medicaid planning.

How Can Parent Protect Rights After Transferring House to Child?

Transferring House to Child with a Disability