What to Do When Unsavory Pair Move in on Stepmom’s Cottage?

My grandparents bought a 500 sq ft cottage on the southern coast of Massachusetts in the 60s. After my grandfather passed away in the early 90’s, my grandmother transferred ownership to my father and stepmom around 1994. She continued to spend her summers there until her death in 2001. My dad and stepmom would go down on weekends and visit as well as do modest improvements—adding a hot water heater, outside shower, and wood stove to make it more comfortable for Gram. Five years ago, my dad passed away at the cottage unexpectedly and my step-mom is now drinking more and more. She didn’t pay the homeowners insurance on the cottage and fell behind on the property taxes for her two properties in Norfolk County. She and I spoke about “what Gram did” when the cottage became an expense she couldn’t manage. I agreed to the same plan. However, when the property was transferred in July 2017, it was recorded as a Massachusetts Quit Claim Deed (with Life Estate Grant). 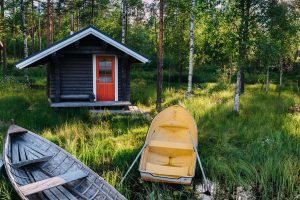 I have been paying the property taxes, the homeowners insurance and the homeowners association fees, totaling about $3,500 a year. My concern is that my stepmom has two people—a 50 year old woman and her 30 year old son living with her (she’s supporting them) at her home in Norfolk County. She pays for everything; groceries, utilities, cable/internet, house maintenance, alcohol, cigarettes, and gas. Now she is also providing them with a vehicle “to drive her around safely” after the 30 year old son stole and totaled the other vehicle. This mother and son now plan to spend the summer at the cottage as they did last summer. Is there anything I can do to separate these people from the property? The neighbors have complained, and I’m concerned that the homeowners association will get involved concerning the condition of the yard, which has a broken pop-up camper, debris from fallen branches, broken furniture, mattress, tires, and other trash. I am concerned that they are wasting the interior of the cottage as well. Currently the roof has been severely damaged by fallen trees from the winter storms and I am working with a structural engineer and insurance claims adjuster. The town building inspector has placed a “do not occupy’ notice on it.  Is there anything I can do to protect my stepmom while she’s at the cottage and the property? Someone suggested that I trespass them?

It sounds like the deed your stepmom signed created a life estate for her with the property going to you when she dies. This means that she has total control over the property in terms of who lives there, but also total responsibility for its maintenance. She should be paying the $3,500 a year, not you. Her failure to make these payments and to do the other necessary maintenance could give you grounds to intervene. But it would mean taking your stepmom to court unless you can convince her to give you the necessary control without the court action.

The bigger picture appears to be that your stepmother is failing and that she is relying on these two unreliable people for care and support. People who are competent are entitled to make bad decisions. And for your stepmom, the companionship of these people who are taking advantage of her may be very important to her, making her decision to take care of them not totally irrational. On the other hand, she may not be seeing things so clearly. If you feel that your stepmom is losing her cognitive capacity or is under the undue influence of this pair, you can either report the situation to senior protective services or intervene yourself to seek guardianship or conservatorship.

Nursing Home Resident Can Keep Vacation Home, but It Will be Subject to Medicaid Estate Recovery

Can I be Paid for Taking Care of My Disabled Son?